Campusabroad
CALICUT, KERALA, India
Campus Abroad Educational Services is registered under Government of India, Reg No: AAC-0517, leading abroad educational and immigration consultancy since 2000 and a member of CHECK. Campus Abroad has been rendering meritorious and inimitable services in the field of education. We facilitate world class education in your chosen field and develop people of character and caliber to evolve combatant citizens of the futuristic global village. We are mainly doing admissions in China,USA,UK,Canada,Australia,Philippines,Russia,Georgia,Kyrgyzstan,Tajikistan,Singapore,Malaysia,Denmark,Germany,Belarus,France,Italy,Switzerland, Korea,Cyprus,Nepal,Ireland,New Zealand,Sweden,Mauritius,Ukraine,Kazakhstan,Bangladesh,Romania,Spain,Netherland Etc....We ensure that the institutions applied through us on your behalf are fully accredited and reputed. Once a student registers at Campus Abroad they get top class services as all their needs are looked after professionally with a personal touch in the most personalized and customized manner suiting their requirement and profile. We also provide IELTS/TOFEL and placement (soft skill and aptitude) training to the students. 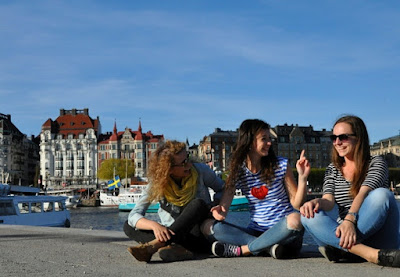 Sweden, the third largest country in the European Union, is located in Northern Europe. With a population of nearly 9.5 million, it has a low population density. Sweden remains a popular destination for its "nature tourism", receiving international visitors from the world-over who enjoy its breath taking scenery and untouched wilderness.
Sweden's cities like Stockholm are well known for its rich cultural heritage and idyllic setting; the cities are spread out across 14 islands. Gothenburg, which is Sweden's second largest city, offers multicultural experiences and a vibrant entertainment scene, and Malmo is a bustling cosmopolitan city.
In the year 2013, the Reputation Institute rated Sweden to be the second most reputable country world-wide. Sweden currently has nearly 35,000 international students as part of its vibrant study scene.
WE REPRESENT
1.Jonkoping University
2.Kalmstad University

WHY STUDY IN SWEDEN

2. Coursework is challenging – in a good way

3. Sustainability and the environment are in focus

4. Equality and diversity are central to Swedish society